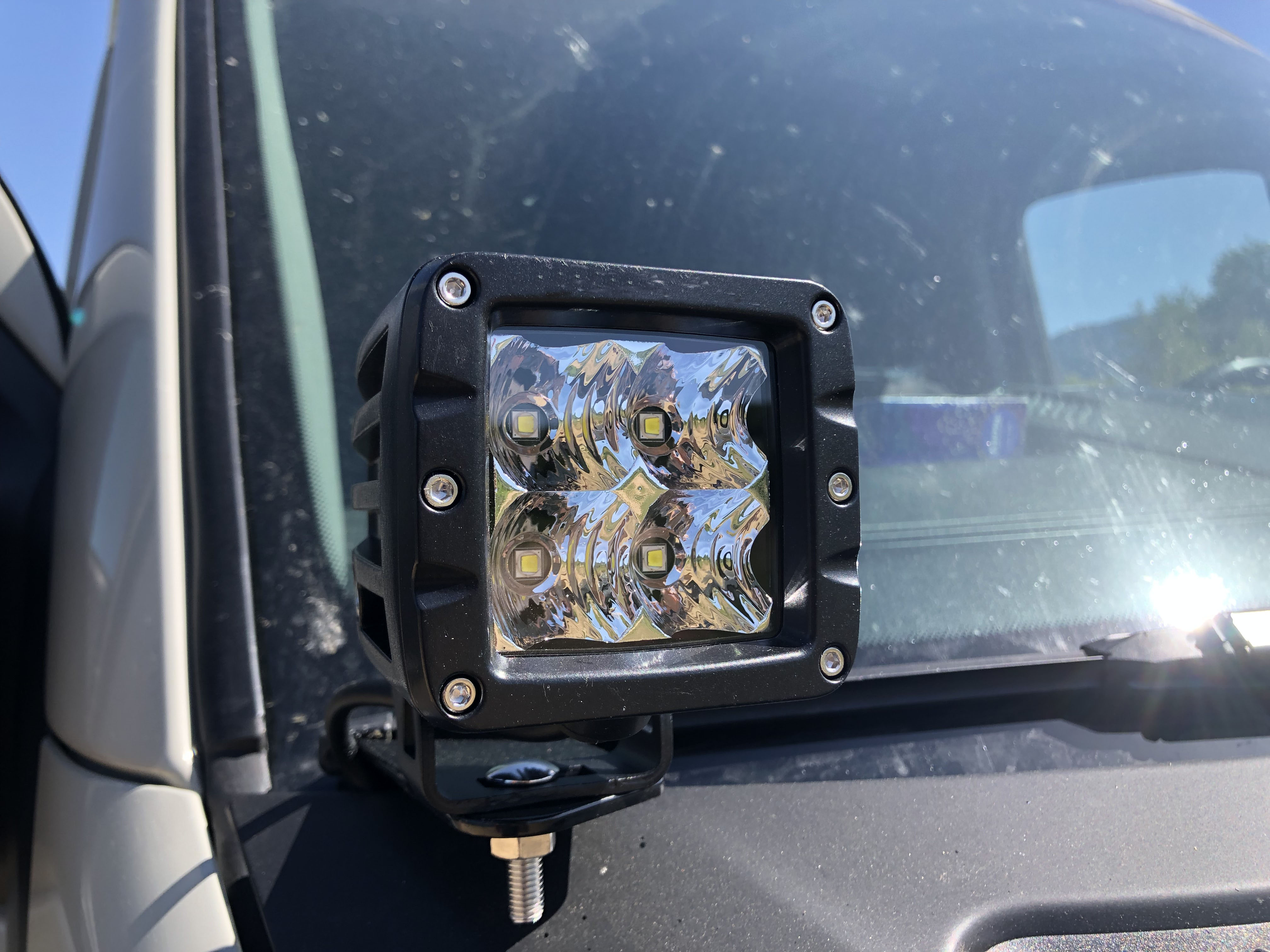 There are many options when it comes to adding exterior lighting to your van. If you browse Instagram, you’ll quickly see people put high-output LED lights on their roof racks, front bumper, push bars and sometimes you even see them underneath vans (never really understood that location). We installed some on our rear doors even. You’ll also see that people install different types of lights: light bars, pod lights and area lights. In this post we dive deep on the installation of LED light pods for your Sprinter van.

We recently put together an LED kit very similar to the one described in this post. Click here to see the kit!

I suppose there is a “cool” factor to having some fancy looking LED lights on your van. But that isn’t why we installed ours. The reason we installed our LED lights is because we wanted to see better at night. I know, pretty logical right?

When we go adventuring in our Sprinter, we sometimes find ourselves on dark roads on moonless nights. Many of these roads are far off the beaten track, rutted and rocky. With our 2016 Sprinter, even with the high beams on, there is a lot of area that is literally left to be seen. It is times like these when we want powerful LED pods to light up the road. And let’s not mention the case of trying to find a good campsite in the dark after a long day of driving. These are the times when it is really nice to just light things up!

The main reason we went with LED light pods instead of a bar was because of where we wanted to mount them. The ideal location for additional lights is not too low to the ground and not too high up. Too low, and they don’t project far enough. Too high and they can cause glare on the windshield. The ideal location, is above your regular lights, but below your own eye level. This is why we chose to install our LED pods on our Sprinter van where the windshield meets the hood. It also turns out, we don’t have a roof rack or aftermarket bumper so those weren’t ever good options for us in the first place.

It appears there has been an LED light pod explosion in recent years. A quick search on Amazon yields a lot of results. I spent a long time reading about the various light pods and trying to find the best value. I wasn’t worried about spending a little cash, but I wanted to make sure that my money was well spent. I ended up going with a pair of 2″ super high quality light pods.

Installing LED light pods your Sprinter van is a fun project. You could easily tackle it in a day. Before we dive into the exact steps we took, let discuss what you’ll need for this installation.

The LEDs actually come with a switch already on the wiring harness (see image below). But we wanted a switch that would integrate seamlessly with our Sprinter dashboard. The rest of the wiring harness is great, they have waterproof Duetch connectors, a relay and protective sleeve over the wires.

The mounting brackets we used attach to the existing OEM hood hinge screw studs. This is a clever solution as it doesn’t require any drilling. Just be sure to torque the nut on really well since there aren’t that many threads available.

Attaching the light pods to the brackets is straightforward. Attach the mounting screw to the bracket. Once that id done, it is time to run the wires between the LED light pods. Since I wanted both to be controlled with a single switch, I used a Deutsch mark wire splitting harness. I also had the cut the wires on one of the led light pods to extend the range of the wires so that it would reach to the other side of the hood.

I put the wires in a braided wire protector and mounted it just under the hood using 3M sticky tape with zip ties.

Disconnect your battery before you start working on the electrical portion of this install!

When I start thinking about the wiring and electrical for a new system, I like to start at the source. For our case, we wanted our LED lights powered from our house batteries. I also new we wanted to these on their own circuit because they are fairly high power consumers.

On our van, the circuit panel for the house batteries is located under the passenger seat. So for this project I had to run wires from that panel, under the floor toward the driver seat, then up through the factory wire chase to finally come out under the dash to the right of the steering column.

Since I tied into an existing circuit panel, I cut out the inline fuse in the wiring harness.

What is a relay?

A relay lets you control a high power electrical device (in this case LED lights) with a very low voltage system (the 12 volt DC in our van). Some LEDs are low enough power to not need a relay. For example, the interior LED lights in my van are just controlled with a switch inline on the positive wire. These LED pods came with a relay, so best to use it.

I installed the relay up under the dash. I just used a zip tie to attach it to some of the OEM holes in the steel interior. The relay has a lot of wires going out of it as it is like the “brain” of the system.

Going from the relay through the firewall to the outside

For a project like this, the wiring details will likely be dictated by your own electrical system in your Sprinter van. However, I bet for 99.9% of the vans out there, you are going to need to run some wire through your firewall. This is because you have the lights on the outside and you want a switch on the inside (I think on the dash is best place for a switch like that).

On our van, there are two circular plugs where it is easy to get through the firewall. However, the top plug wasn’t available as it has the wires that run from my house batteries under the hood to my circuit panel under the passenger seat. So I cut a “+” in the lower rubber plug and ran the LED wires through it.

The only thing you need to send to the outside is the Deutsch connector coming from the relay; it plugs directly into the wiring harness on the LED pods. Once to the outside, I used a split wiring harness I bought so I could power up both pods with one switch. I didn’t want to have two switches, one for the left LED and one for the right, that would be silly.

Important note about wiring up two LED pods to one switch

Each LED light pod comes with a 5 amp inline fuse on the positive lead going to the relay. If you are going to be hooking up two LED lights to this one relay, you need to install a 10 amp fuse. I burned through plenty of 5 amp fuses testing my system out, so trust me on this one.

Wire up the switch in the dashboard

The last thing to do is wire up the switch that will actually turn the lights on and off. I used a switch that fits into one of the “blanks” on the dashboard. I’ve seen others drill a hole and fit the switch that came with the lights. This is all a personal preference.

If you decide to go the route of using a switch that fits precisely into one of the banks. Here is out to get the blanks out.

Installing additional lighting on your van is extremely functional. They provide additional light for when you are driving far off the beaten track and for helping you see that critter or rock in the road. Not to mention, they can make finding a late night campsite much easier.

2 thoughts on “Installing LED light pods on your Sprinter van”