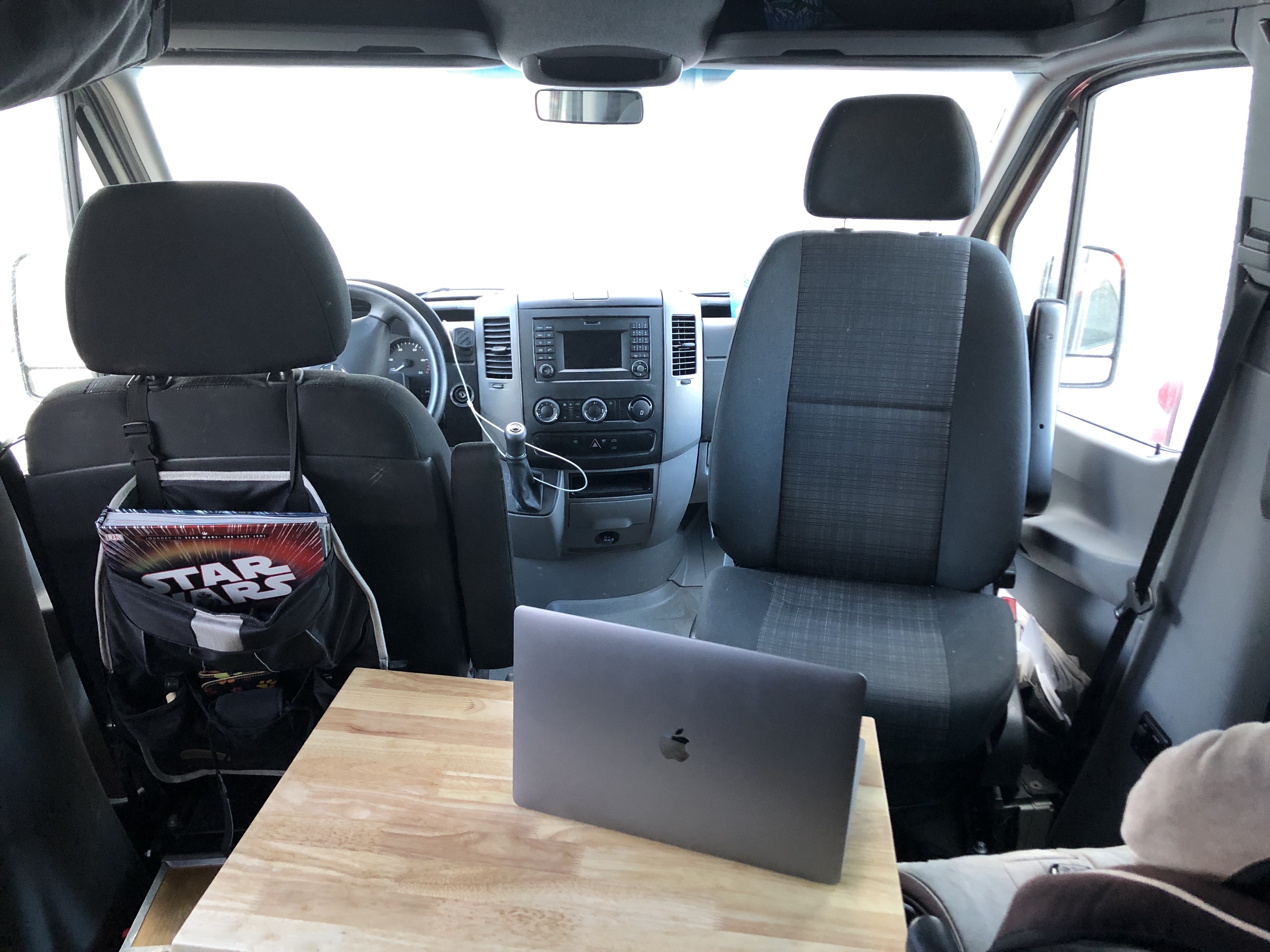 One of the best things about my work is that I can take it on the road. In order to do that (and be productive) I need two things: 1) reliable internet and 2)  power to keep my MacBook Pro computer charged. I’ll save a post about reliable internet for another day as that is a big topic with no easy answers, but keeping my MacBook Pro charged is done with an inverter. This post dives into how I installed a 1500W inverter in our Sprinter van.

There is a ton of reading available on what an inverter is and how one works. I won’t go into it deeply here; Google is your friend here. That being said, here are the basics if you need them. An inverter takes direct current (DC) from a Sprinter van’s battery bank and converts it to an alternating current (AC). AC power is the type of power that you have in a home where you can plug in regular appliances and they just work. If you want to be able to plug in appliances (think computer chargers, hot plates, hot water kettles, microwaves, hand blenders, hair dryers, etc.) then you want an inverter.

When it comes to choosing the best location for your inverter you are really constrained by the location of your batteries. In fact, you really want your inverter as close as possible to your batteries. This is because inverters draw a lot of current from your batteries. The bigger the current draw and the further the distance, the larger gauge wire you’ll need to handle that current. So unless you want 2″ thick wires running through your van, keep your batts and inverter close together like two good friends.

Our van came with the batteries installed in the factory auxiliary battery location under the hood on the driver’s side. Given that inverters should not be installed outside the van, the closest reasonable place to install an inverter is right behind the driver’s seat. And this, is where we put ours.

Before you run out and buy a cheap inverter on Amazon, think about how you might use it. Inverters are rated by Watts. You’ll want to buy an inverter with a high enough Watt output to handle the appliances you want to plug in. For example, a hair dryer requires more than hand blender which requires more than a laptop.

I knew the most power hungry appliance we would want to plug in would be a hot water tea kettle. The collapsible silicon kettle we bought on Amazon sucks up 820W. So a 1000W inverter would cover this fine. However, I wanted to add some buffer in case we decided we wanted a bigger kettle or some other appliance I can’t foresee so we went with a Samlex 1500W pure sine inverter.

Alternating current (AC), as the name implies, has an alternating electromagnetic field. It took me a long time to get my head around the physics of this. During my research for our Sprinter van it dawned on me that AC current is an electromagnetic wave. When thought of as a wave, you can see that the alternating current is represented by the peaks and troughs. Maybe it is just me, but once I understood it was a wave, it clicked a little more.

But how much current does an inverter really draw?

Let’s assume you have a 12V battery system in your van (like most of us) and you’ve decided you’ll need a 1500W inverter. We can use Ohm’s Law to calculate the maximum current (amperage) that the inverter will draw. Ohm’s Law states that Amps x Voltage = Power (Watts). So we do some basic algebra and see that the current will be:

That’s a lot of amps to send through a thin wire. In fact, if you don’t size your wire correctly it could heat up to the point of causing of a fire. So this is pretty serious stuff.

How big is big enough?

At some point you’ll need to put a stake in the ground and buy some big fat wires to connect your inverter to your battery. But how is big enough when it comes to wires?

Once you determine the size and maximum current your inverter will draw, you’ll need to measure the distance between battery and inverter. For our location, the run is around 8 feet for each wire (positive and negative). So for my example our maximum current is 125A and the total distance is 16 feet. Now that we know these values we can use this nifty calculator to determine the size wire you need.

The calculator indicates I need 2 AWG wire. So I went up two sizes to 1/0 AWG because I wanted to be extra safe and I felt I could still fit it in my location. Please do you own calculations and research. You don’t want to have a fire in your fancy van!

The best way to run the wires from the factory auxiliary battery location is  to the driver-side seat pedestal is down underneath the van.

I was able to get both the positive and negative large 1/0 AWG wire inside 1″ braided loom. I used a mix of pushing, pulling and cursing to get the entire length of it through the undercarriage to the “rubber boot” below the driver-side seat pedestal. Zip ties helped secure the wire in some areas. I also took advantage of existing metal braces to make sure the wire won’t sag or rattle.

Hooking up the wires

When I first started out on this project I thought to myself, “how hard could be, just run some big wires from the battery to the inverter and bam! We’ll have power!” And in a lot of ways, especially now that the project is done, it was this easy. But while I was actively working on it, there were a ton of decisions to make. I’ll iterate the most important ones here in hopes that it helps someone else out in the future.

Before you can connect any of the large diameter wired to the inverter you’ll need to crimp on some lugs. These are the 3/8″ lugs we used that connected well to our inverter and battery.

Lugs don’t just screw themselves onto the wire. They need to be crimped on. Unfortunately, when you are dealing with such large wire, you’ll need a hydraulic crimper to do a good job. We bought this one off of Amazon. It works fine. I don’t know how long it will last, but it got this job done and will probably do at least a few more. Watch a few YouTube videos on how to crimp and practice on a test wire before doing the final crimping.

Of course you can’t just have a lug on the wire. You need to make it look nice AND keep out the oxygen. So get some marine grade adhesive shrink wrap.

At this point you could hook up some wires and things would work. However, I wanted a dedicated switch where I could turn off the entire inverter circuit. I used this Blue Sea Systems 300 Amp mini switch. (Although I would hardly call it “mini.”) Recently I haven’t been using the inverter much and I just leave this switch in the off position as the default. While this switch wasn’t required, I like knowing I can disconnect the circuit down the road if I need to troubleshoot something.

The hardest part of this entire project was determining where to put everything. Yes, there was really only one place for the inverter to gobased on the location of my house batteries. But what should I enclose the inverter in? Should it just be screwed to the back of the seat pedestal? Where should the power switch go?

I installed this inverter at the same time as the solar panels. This means I had to think about how to integrate the two systems where appropriate and where to isolate them. For example, the solar panels ultimately need to get to the batteries, but I didn’t want to run two sets of wires. So I ran one set of wires from the batteries to under the seat pedestal. Then inside the seat pedestal I mounted positive and negative bus bars. Then I branched off these bus bars for the inverter and solar panels. This meant more decisions, where exactly should I mount the bus bars inside the seat pedestal? You only want to drill screw holes once! Anyway, my point is, there are lots of small decisions to make. Take your time, often the best decision doesn’t come immediately.

I touched briefly on whether the inverter should be put in a box or mounted directly to the rear of the seat pedestal. I’ve seen both done by others. Ultimately, I decided to build a box out of furniture grade plywood and aluminum bar stock. I have rear seating in my van and I just know my son would have his feet all over the inverter. Now his feet are all over my box.

I won’t launch into a full carpentry lesson here (not that I even have the credentials to do that), but I will say this. If you decide to house your inverter, or batteries for that matter, in any kind of box, use a Kreg Jig. A Kreg Jig is a wonderful tool for joining two pieces of wood at right angles. The joints come out square and strong. I’ve used it for making bookshelves, tabletops, and now, an inverter box. They are a little pricey, but definitely worth it!

So our van has power now and it is pretty awesome. We’ve already used our electric tea kettle several times when we wanted to make coffee without setting up our camp stove. I’ve also used it to keep my laptop batteries charged when I had to do some unexpected work from the road. Overall, the inverter is quickly rising to the top of my list of essential necessities for any van conversion.

1 thought on “Inverter installation in our Sprinter van”