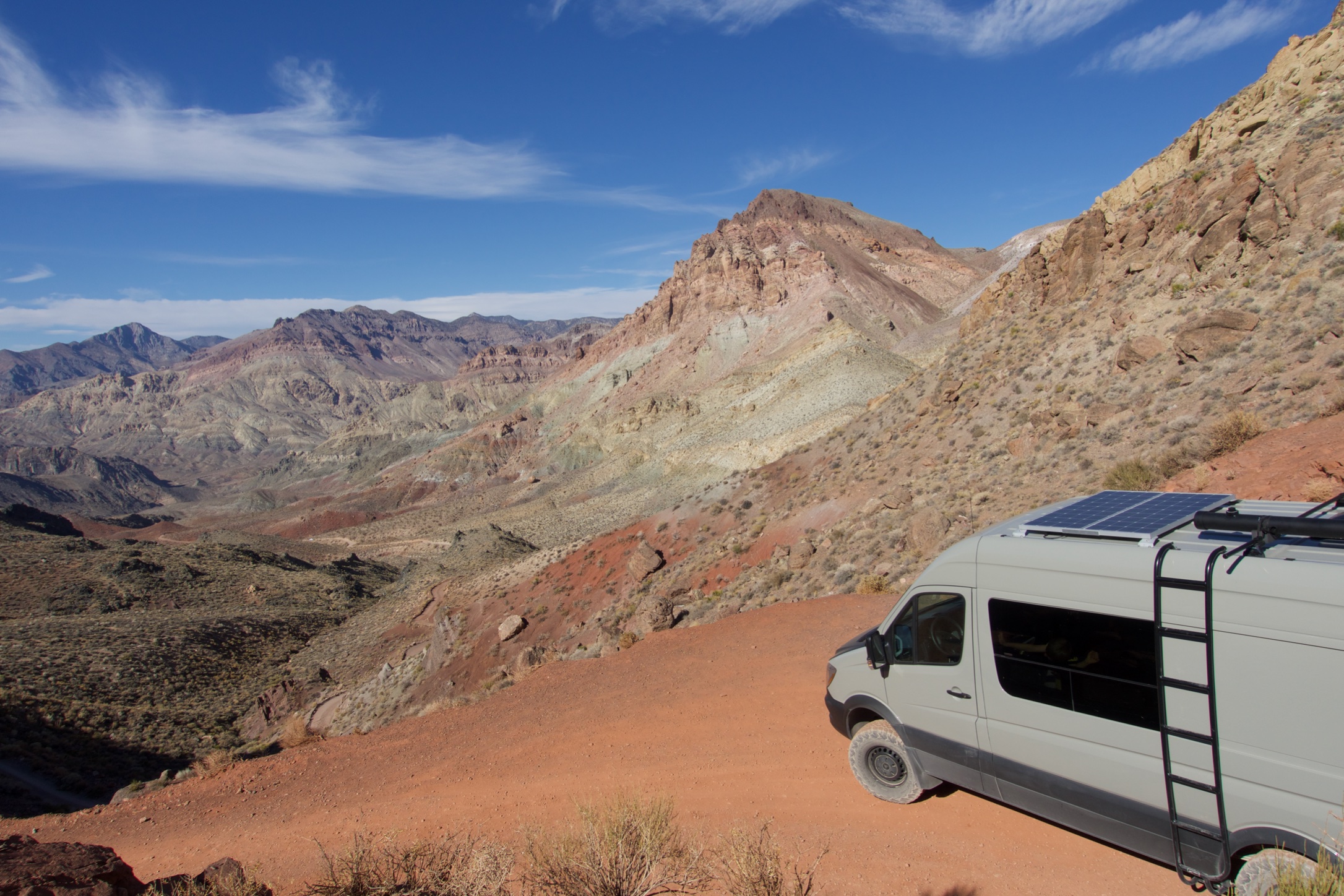 Before we could even really get going with the install we had to do a bunch of interior prep work. First, we had to remove the drivers seat, since this is where we were going to hook in to our existing house battery system. Second, we had to drop our ceiling and part of our side panels so that we could run the wires that would come in through the roof from the solar panels.

Once we removed our ceiling panels, which were mainly held in place by L-track, we had to gently pull away the Thinsulate insulation. I was a little worried about how this would go back, but I can confirm now that the project is done, that it bonds right back up onto the ceiling with a little 3M spray adhesive.

We will start on the top of the van and cover solar panels first and then work our way to the rest of the system.

There are a bunch of other blog posts out there about how to size your solar array. Do you want to know how we chose 200W? Basically, we wanted as much wattage as possible while still leaving a good portion of the roof for a roof rack. All of the 300 +/- panels we found were just too big.

We chose the the Renogy solar panels for our Sprinter van because they came in a kit, were affordable and it was easy to understand how we could mount them to our OEM roof rails. Now that the project is done, I don’t think the kit would be necessary. But when you are taking on a project like this for the first time, there is a bit of an intimidation factor and the idea of a kit helps with that.

Here is the kit we bought. We got the 200W kit with the 20 amp MPPT controller. If we planned on adding more panels we would go with a higher amperage controller, but we aren’t planning on expanding.

For our two 100W panels there are a few options for mounting them to the roof. We decided to attach each panel to one another, essentially forming one unit capable of producing 200 Watts. This allowed us to only use four brackets (see link below) to mount the panel to our OEM roof rails.

We used 1 1/4″ angled aluminum cut to 12″ lengths to attach the panels to one another. We also ran a bead of silicon between the panels and between the aluminum and panels. Once everything was dry and screwed together we had a very rigid “200W panel”.

Once the brackets are attached to the panels you can put the whole thing up on your roof, but don’t tighten it down yet. You’ll want to be able to move it to drill the hole in your Sprinter van roof that will be necessary to run the wires through.

There’s not an easy way to put this: you’ll need to drill a hole in your roof to run the wires from the solar panels into the interior of your van. I drilled a 3/4″ hole and it was just big enough to fit the wires through with a rubber grommet. Don’t forget to paint the edges of your drilled hole and don’t forget the rubber o-ring (grommet) to keep the wires from rubbing against the bare metal.

Parallel or in series?

The two 100W panels can be wired together in parallel or in series. However, the kit doesn’t come with a MC4 Y connector so running them in parallel isn’t really an option given what comes in the kit. There are pros and cons to both approaches. The biggest benefit of running them in parallel is that if one panel is shaded, the other keeps pumping out watts. When they are in series, shading on one slows them both down. The benefit of running them in series is the panels put out higher voltage with lower amperage which means you can run your wires further without sizing them up. We opted to do ours in series, largely because we had a time crunch to get them done and I didn’t want to wait for another part the (Y connectors) from Amazon. In reality, I doubt we will notice any difference as the chances of parking under something that partially shades just one panel, but not the other is fairly slim. Also, if we ever wanted to change it, we could do so by redoing the exposed wires on the roof, so don’t get too hung up on this question.

We also put in a 10A MC4 in-line fuse along the positive wire up near the solar panel on the roof. A good rule of thumb for wiring is to put fuses as close to the things that produce current as possible. These are things like your panels, batteries, etc.

After we had our hole drilled we ran the writes immediately into some 3/8″ braided wire loom and came through our existing insulation. We then ran these wires in the loom across the roof toward the side of the van to connect to the charge controller.

Connecting to the Charge Controller

One of the most challenging aspects of this project was deciding where to put the charge controller, inverter, on/off switches, breakers, fuses and where to run wires. Our van is very modular. Almost all of it can be taken out (bed, soft cabinet, rear seats) without much trouble. Unfortunately, this also means we don’t have a dedicated “electrical box” which might be an obvious place to put the charge controller.

Ultimately, we mounted our charge controller on the wall right between our soft cabinet and “cockpit.” The wires immediately go into loom and then disappear behind the paneling. If you notice the small black wire not in loom, that is a wire to the thermometer that runs to our battery. It goes directly from the charge controller to the batteries to improve charge efficiency.

I don’t love this location for the charge controller, but it isn’t bad either. With the big mule bag right there you hardly notice it. However, if I were to do this project again, I would consider getting a more compact charge controller that is accessible via a dedicated screen or even just via your phone over Bluetooth.

Connecting to the battery

Our van has two 6 volt sealed AGM batteries installed under the hood in the factory auxiliary battery area. These are wired in series to give 12 volts. To finish this job, all we really needed to do was run the wires into the driver side seat pedestal where we can hook it up with the new wires we ran from the battery for the inverter. (We will do another post about installing those wires and the inverter, but in the meantime, just trust me that there were wires there for us to tap into.) We also installed a 20A breaker along the positive wire from the charge controller to the battery. We did this mainly so that we would have a way to shut off charging of the battery from the solar panels in case we needed to troubleshoot.

We’ve already taken one week long trip with the Renogy solar panels on our Sprinter van. I will say, the panels performed really well. Our batteries were usually back at 100% by late morning and that was after running our rear door cargo lights for hours at night. Some mornings we even plugged in an electric kettle into the inverter for some quick hot water. All in all, I’m really pleased with how the whole system is performing 👍

Due to high demand, production time is currently about 3-4 weeks. Free shipping to the lower 48. Dismiss