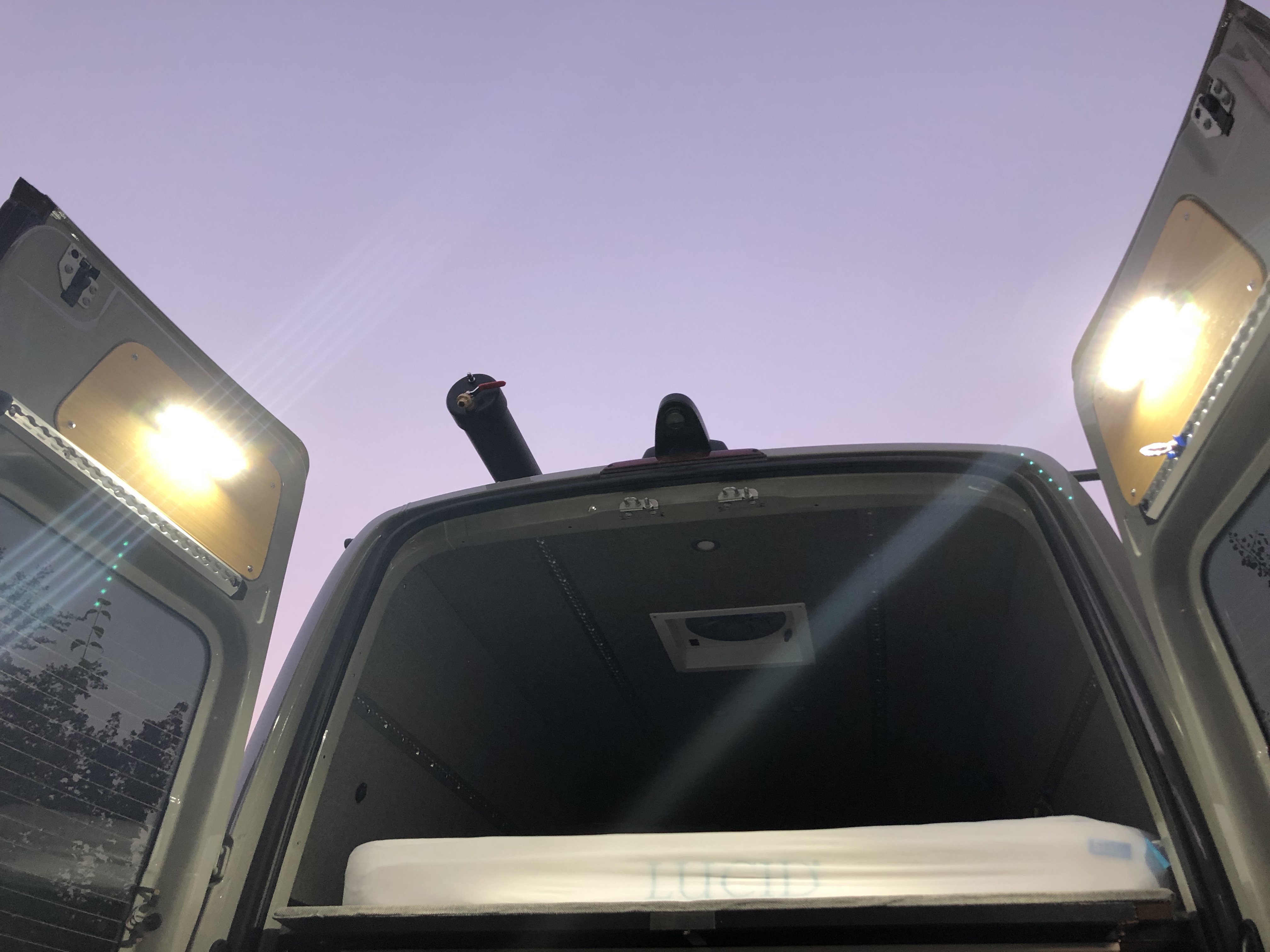 When we open our rear doors, we have a handy switch on the right side panel. Before this project, it turned on two LED lights in the “garage” of the van – one on either side. This has been really great, I love this design. But wouldn’t it be nice to flip that switch and not only light up the garage, but light up the rear area outside the van? Well, we thought so too, and this is why we decided to install rear door LED lights on our Sprinter van.

Now I know what some people might be thinking, why not do additional switches that just turn on the rear door LED lights? I thought about this and I can’t say it is a bad idea per se, you could even do a switch on each side and turn them on independently. But in the end, it came back to KISS (keep it simple silly). One switch turns on the cargo lights. Done. Simple. (Down the road if we really decide we want more switches, it would be very easy to put those in so it’s not like we are boxing ourselves into a corner with this design choice.)

Anyway, on to the existing electrical. So we have this switch that we want to tie in to. Fortunately for us, the previous owner ran very high quality 14 AWG for the entire existing cargo light electrical circuit. The existing lights only pull about .5 amp each and the whole circuit is rated for 15 amps, so we have lots of wiggle room. It’s not like we are hooking up an inverter to this circuit! This is more than enough to run a few more amps through to power the new LEDs.

I was actually a little surprised at how hard it was to find a light bar that would work well for on rear doors. Since they are mounted vertically, they had to have angle to them and ideally, be at least a little bit waterproof. After much searching, we finally decided on these from Amazon.

So far I’m really pleased with the value of these. They have a great weight to them and seem like a good quality light.

To remove our rear bamboo panel we had to take off one line of L-track, remove our wheel well cover. There was enough slack in our wiring to just move the rear panel forward a little to open a workspace and not worry about damaging things.

With panel removed we were able to verify that there was a good circuit to hook into. Up until this point, we had never removed the lower paneling.

Step 2. Run Wires to Upper Panel in the Rear Door

Next it was time to run wires from the rear D-pillar, through the OEM rubber tube, all the way up to the panel at the top of the rear door.

From the research I did I was most concerned about this step of the process. Immediately, we started to run into a few complications. First, to remove the rubber boot from the van (not the door) people recommend putting your hand in the pillar and squeezing some clips and pushing it out. But on our van the bed frame blocks a good portion of the hole into the D-pillar. I couldn’t fit my whole hand in. My son’s hand fit, but he didn’t have the strength or finesse to find the clips, push them in and push the boot out.

Some folks that are better at fishing could probably push the wire up the rubber boot all the way to the upper panel in the door without even dealing with the boot attachment to the door. I didn’t have those skills….

To fish the wires I used some old fairly rigid wire I had lying around.

Step 3: Wiring from the D pillar to the Rear Panel

I incorrectly assumed that the hard part was over. We got the wire all the way from the upper panel in the rear door all the way down to the D pillar. Now we just needed to get it over to the sidewall and hook it into our existing electrical.

Here is where I did quite a head scratcher. There isn’t a way from the D pillar into the sidewall at this location in the van. The D pillar is completely sealed off. We could go up to the roof and then back down, but that would involve removing the bed and dropping the ceiling panel…uh, no thanks, at least not for this project!

To get around this problem, I got an angle bit and drilled a 3/8″ hole from the sidewall into the rear pillar.

The angled bit above lasted for one hole, but it broke by the time I got to the other side. I actually found I didn’t really need it and I could carefully drill a hole without the angled approach.

I used a big magnet to clean up the metal shavings that fell, and of course, I painted the drilled holes to help prevent rust.

Step 4: Splicing into the Existing Wiring

To splice into my existing wiring I used Wago connectors. These have been used throughout the van and for a job like this, they were perfect! No twisting, no electrical tape, just plug and play goodness!

I also used the Wago connectors when hooking up the lead wires from the LED light bar. This way, if I ever need to get access to my rear door upper panels, I can just disconnect the wiring and remove the entire panel, instead of having it dangle down from some wires.

With everything hooked up, but not yet buttoned back up, we flipped the switch. Yay it worked on the first try!

This was a great project. It involved removing some of our L-track, lower panels and some drilling. We were able to tap into our existing house battery system and cargo light switch for a nice seamless integration. It looks as if the lights had been there all along. All in all, I’m super pleased with our rear door LED lights!